The interaction between technology and the law, in which politics plays a major role, is one of the great challenges of our time. Make no mistake, the current economic crisis will not change, nor does it erase other major issues such as global warming. It is only through a revision of laws regulating the ownership of works of the mind that we can fully enter into the culture of the twenty-first century, and this battle is far from won.

This battle has a name, la Culture Libre, a cultural environment that was, there are only a few generations, the norme, and that is the origin of culture in which we live today. But our Culture, after a few deft changes in laws obtained by lobbies, especially through its collision with digital technologies, became a feudal Culture, where a small group has a despotic and total control over how it should be expressed, and the path it should take.

It is time to release the Culture. 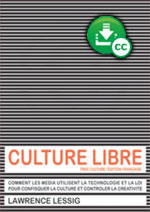